The Tradition of Sharing

Why should I post the question or an answer?

Sharing the knowledge gained, is a generous way to change our world for the better. -Sr2Jr

Consider the figure below, which shows a leaky bucket policer being fed by a stream of packets. The token buffer can hold at most two tokens, and is initially full at t = 0. New tokens arrive at a rate of one token per slot. The out- put link speed is such that if two packets obtain tokens at the beginning of a time slot, they can both go to the output link in the same slot. The timing details of the system are as follows:

1. Packets (if any) arrive at the beginning of the slot. Thus in the figure, packets 1, 2, and 3 arrive in slot 0. If there are already packets in the queue, then the arriving packets join the end of the queue. Packets proceed towards the front of the queue in a FIFO manner.

3. A new token is added to the token buffer if it is not full, since the token generation rate is r = 1 token/slot.

4. Time then advances to the next time slot, and these steps repeat.

a. For each time slot, identify the packets that are in the queue and the num- ber of tokens in the bucket, immediately after the arrivals have been processed (step 1 above) but before any of the packets have passed through the queue and removed a token. Thus, for the t = 0 time slot in the example above, packets 1, 2 and 3 are in the queue, and there are two tokens in the buffer.

The following table indicates the packets that are in the queue and the number of tokens in the bucket from the given figure and data: 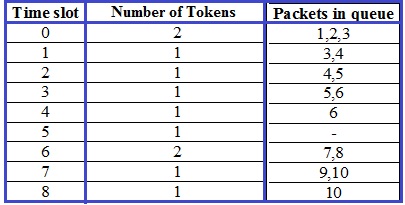 The following packets appear on the output after the token(s) have been removed from the queue: